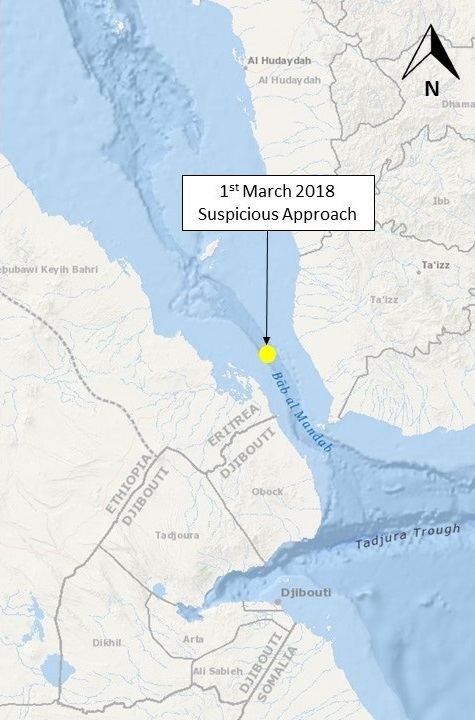 Intelligence comments: The incident was located in the Bab-el-Mandeb nearby to Mokha, Yemen. Mokha port was taken by coalition forces in January 2017 after being held by rebel groups. The port is currently closed and not being used for commercial operations. In recent times, Houthi rebels have conducted missile attacks and used explosives in an attempt to obstruct plans to use Mokha port as an alternative to Hodeidah. Hodeidah is currently held by Houthi rebels and was previously responsible for 80% of Yemen’s imports.

It is not clear if the skiffs originated from Yemen or Somalia, however pirate paraphernalia including ladders and drums were potentially sighted.

What has remained consistent is probing approaches by pirates in relation to assessing vessel vulnerabilities. It is uncertain whether the approach reported coincides with such tactic as with limited information it is difficult to assess.

Yemen attack – at least 14 people killed in raid on Aden counter-terrorism headquarters: At least 14 people have been killed and 40 wounded when car suicide bombers and gunmen tried to storm the headquarters of a Yemeni counter-terrorism unit in Aden on Saturday 24th February. Islamic State, in a statement carried by its Aamaq news agency, claimed responsibility for what it described as two “martyrdom operations”. Security said two suicide bombers detonated two cars laden with explosives at the camps entrance while six gunmen tried to storm the facility.

At least 38 people killed in Mogadishu twin suicide car blasts: Two car-bomb attacks followed by continuous gunfire have left at least 38 people dead in the Somali capital of Mogadishu. The first took place outside the presidential palace late on Friday. The second hit a nearby hotel. A gun battle followed the attack near the presidential palace. These attacks have been attributed to al Shabaab.

Somali car bomb detonated during police check: The Somali government stated soldiers managed to prevent a car bomb from killing many people in central Mogadishu after they stopped a suspicious vehicle on the outskirts of the capital. As the car was checked the driver detonated the bomb. One soldier was killed and several civilians injured. Al Shabaab claimed responsibility for the attack.