There have been unconfirmed reports from the RMIFC (Regional Maritime Infusion Centre) that over the last three (3) months Pirate Groups have been operating in the territorial waters of Puntland between Bosaso and Aluula. The presence of PAG’s is confirmed with two (2) incidents reported to UKMTO during the period. 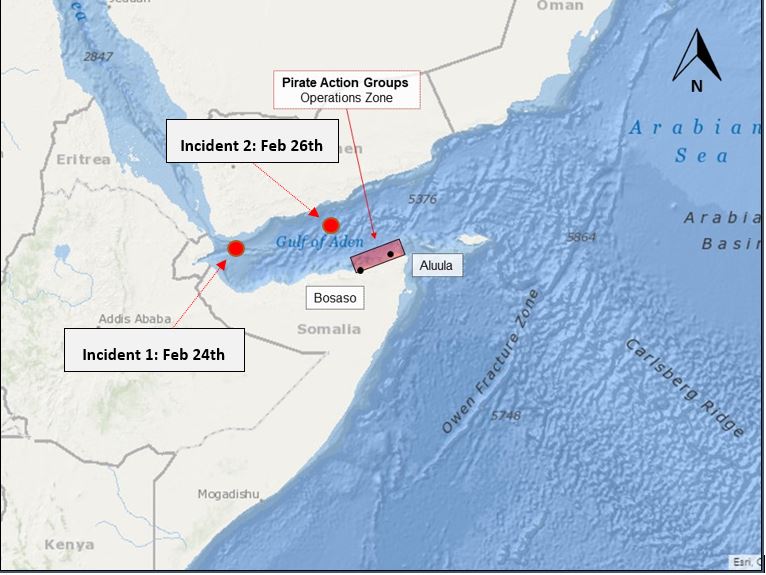 The political situation in Somalia continues to deteriorate with a breakdown in relations between the Federal Member States (FMS) and the Federal Government of Somalia (FGS). The security situation across Somalia remains unstable and fragile, as demonstrated by the assassination of the P&O Port Construction Manager, Paul Formosa, in Bosaso on 4th February by Al Shabaab. Beyond the calls from terrorist groups and factions, the Puntland population is increasingly unhappy with the concessions offered to foreign economic interests: last December, the massive issuance of 31 tuna fishing licences to the China Overseas Fisheries Association (COFA), which is allowed to fish within the 24 nm limit.

President Hadi reiterated on February 26. that Yemen can only achieve peace in accordance with UN Security Council Resolution 2216 from 2015, which demands that al Houthi forces withdraw from all areas seized during the conflict and disarm. The al Houthi movement rejected those terms in the most recent round of UN-led peace consultations in December 2018.

UN aid officials have for the first time in six months reached a vast store of desperately-needed food on the frontline in Yemen’s Hudaydah port. The Red Sea Mills facility holds enough grain to feed 3.7 million people for a month, but the UN had warned the grain was at risk of rotting.

The scheduled withdrawal of 1,000 African Union Mission in Somalia (AMISOM) soldiers from Somalia may allow al Shabaab to recapture small towns near Somalia’s capital. Burundian AMISOM forces began a partial withdrawal from Somalia on February 21 as part of AMISOM’s accelerated drawdown of Burundi’s contingent, which includes withdrawing from several towns in central Somalia. Al Shabaab may increase attacks on the capital and nearby regions following the drawdown.