Incident details: On the 8th April an underway tanker was approached by 3 skiffs at 0724UTC on starboard and port sides in the Bab-el-Mandeb Strait. AST fired flares and warning shots. 20 minutes later 2 more skiffs were sighted. Further warning shots fired and skiffs moved away. Vessel safe. 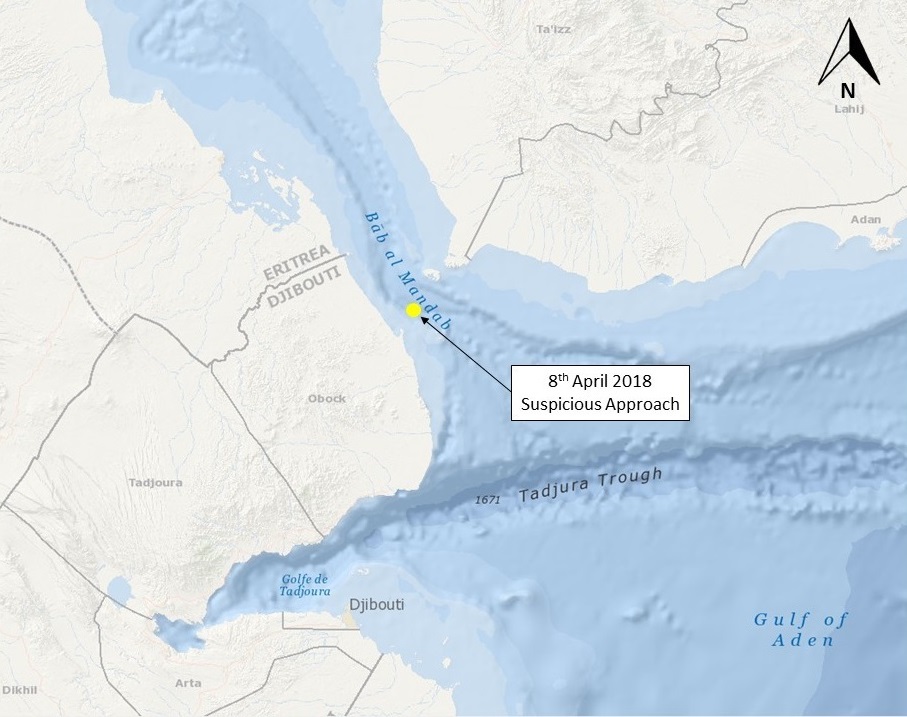 Intelligence comments: Suspicious approaches continue in the Bab-el-Mandeb and Gulf of Aden. As weather conditions become more favourable for small boat operations in region, this will see an increase in not only regional patterns of life but also possible piracy operations. Extreme vigilance should be taken at all times.

Houthi rebels have stepped up attacks on Saudi Arabia this week targeting the capital Riyadh and the southwestern city of Jizan. Furthermore, there have been increased coalition airstrikes on Hudaydah.

Saudi-led alliance focus on Yemen’s coast: High tech radar units stretch along the quay of Mokha Port in southwestern Yemen, underwater fortifications have also been built to block attacks from unmanned boats packed with explosives. Mokha port was once a thriving coffee hub and is now a heavily guarded naval base from which the UAE monitors shipping lanes and the movements of the Houthi rebels. UAE forces also hold Hawlaf Port on Socotra Island and Perim Island. Winning and keeping control of Yemen’s ports in the Red Sea is of paramount importance. Gulf government officials have said that capturing the coast would block the Houthi supply lines and push them towards the negotiating table. Houthis still control Yemen’s most populated areas such as Sanaa and the main port of Hodeidah. (Source: Reuters)

Once a hostage, Sri Lankan Sailor now helps battle Somali Pirates: In the city of Bosaso, Somalia, Sarath Surasena teaches students who are recruits for a new coast guard being established in Somalia’s Galmudug state which was once the centre of piracy operations. In 2010 Sarath Surasena was sailing from South Africa to India when Somali pirates hijacked the ship he was working on and forced the crew to sail to Harardhere in the Galmudug state where he was held crew hostage for two years. The pirates used the vessel as a mothership with the hostages as their crew. (Source: All Africa)

Somalia to end military cooperation with the UAE: The Somali Federal Government ended a military cooperation and training agreement with the UAE after Somali forces seized nearly $10 million from an Emirati aircraft in Mogadishu this week. Somali officials accused the UAE of delivering the money to support former Lower House speaker Mohamed Osman Jawari against the Somali President. The UAE stated the money was intended for training the Somali National Army.