Reports of shooting towards fishing vessels in transit have been confirmed by the Somali Maritime Police along the coast of Lower Shabelle between 3rd and 17th April. The last incident involved 4 fishermen sailing off Danane (28 nm south west of Mogadishu) on the 17th April. Danane is a coastal town which was recently seized by al Shabaab forces. 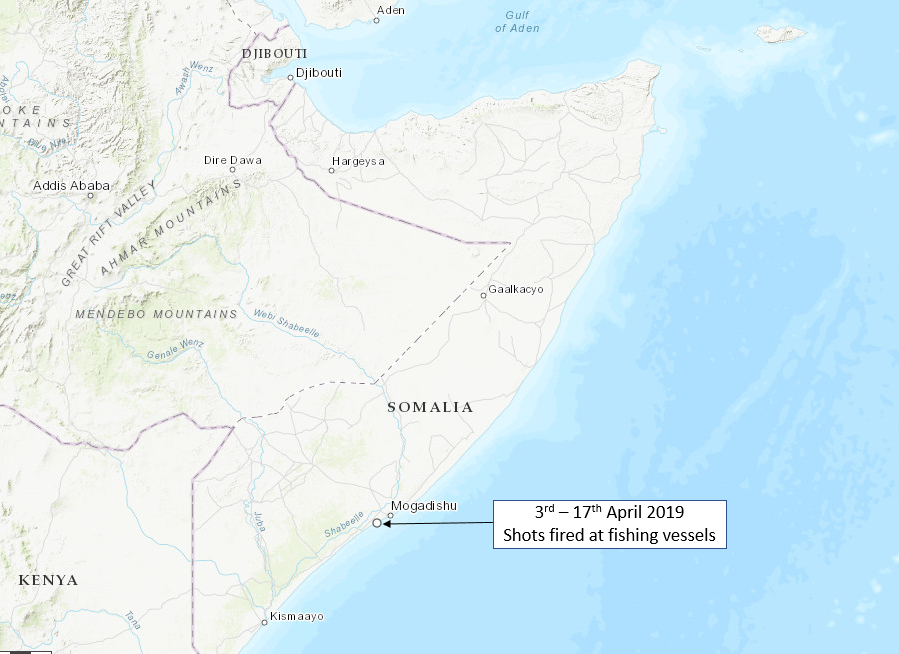 Merchant and fishing vessels transiting or fishing in this coastal area are advised to keep well clear of coastline.

UN Special Envoy to Yemen Martin Griffiths announced on April 15 that the Hadi government and al Houthi movement agreed to a plan to implement the first phase of redeployments in al Hudaydah governorate in western Yemen as part of the UN-brokered Stockholm Agreement. Al Houthi forces are set to withdraw from Ras Isa Oil Terminal and Saleef Port in al Hudaydah governorate during the first phase of redeployments.

A spokesman for the al Houthi armed forces Yayha Sarea revealed a new domestically-made Badr F missile during a press conference in the al Houthi-controlled capital Sana’a on April 16. The al Houthi movement claims that the Badr F is a ballistic missile with a range of 160 kilometers, which is 30 kilometers greater than that of the Houthis’ existing Badr 1P missile.

Suspected al Shabaab militants kidnapped two Cuban doctors in Mandera town on the Kenya-Somalia border in north-eastern Kenya on April 12. The gunmen killed a Kenyan police officer in the course of the abduction before crossing into Somalia.

Likely U.S. aircraft conducted an airstrike in Puntland region in northern Somalia that killed the deputy commander of the Islamic State in Somalia Abdihakim Dhuqub on April 14. Unidentified aircraft fired several missiles at a vehicle transporting Dhuqub several kilometres outside Xiriiro village in the Qandala mountains in Puntland. Dhuqub was one of the founders of al Ittihad al Islamiya, a predecessor of al Shabaab, in the 1990s.