It has been reported that a Panama-flagged tanker has been hijacked off the coast of northern Somalia as it was transiting from the UAE to Mogadishu. According to various reports, the vessel is believed to have been taken by an unidentified group on the 16th August (2020) by six (6) armed persons. The vessel seemed to have developed mechanical issues before being boarded by the group. At present, the state of the twenty (20) crew and vessel is unknown.

According to S-AIS the vessel (as of 19th August) is anchored off Bereeda, off the northern coast of Puntland. Official reports on this incident from the UKMTO and MSCHOA have only been produced late on 19th August suggesting possibly ulterior intentions (rather than traditional hijacking) of the group who have boarded the vessel. 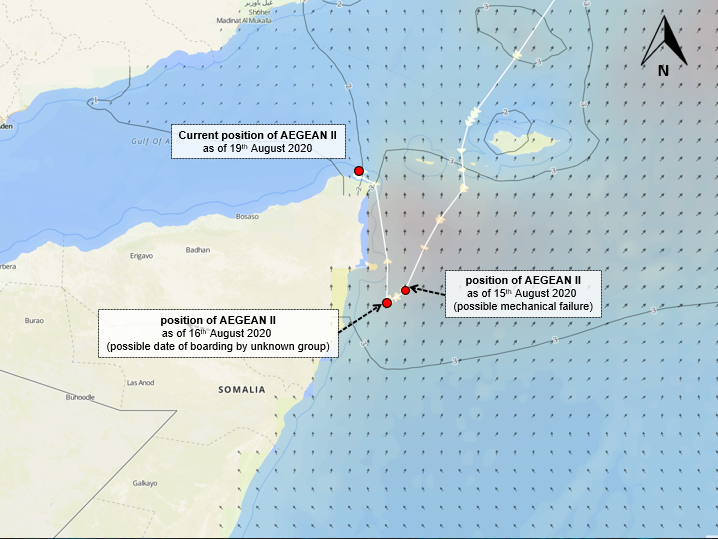 The AEGAN II ship was travelling from the United Arab Emirates (UAE) to Mogadishu port, Somalia when it appeared to develop mechanical problems. This information has come from sources on the ground in Somalia which adds weight to the notion that this is not a ‘classic hijacking’.

It is worth noting that the AIS on-board the vessel seems to be constantly on and displaying ‘Armed Guards On-board’. This information seems unlikely as it is common for vessels to display this due to the historical belief that Somali pirates are able to identify ships through AIS.

The fact that the vessel passed through the Socotra Gap is unfortunately a common occurrence presently due to the lack of known pirate activity in the region. This is a timely reminder to all vessels to remain and transit round Socotra Island as per recommendations from BMP. The lack of a known armed security team on-board, coupled with the low free-board of the vessel (3m) and the possible absence of any defensive / hardening measures makes this vessel a vulnerable target in the first place.

Neptune P2P Intelligence has also seen reports that suggests the vessel was taken by either Puntland Police or a group that has been sent by locals due to (unconfirmed) reports of the vessel allegedly dumping waste offshore.

This seemed to be confirmed by the Puntland Minister of Fisheries who has denied that the vessel has been hijacked but has been taken by Puntland Forces. There has been no explanation as to why the vessel has been seized. It is believed that a group of men wearing police uniforms boarded the vessel and robbed the crew. There have been suggestions that weapons have been removed from the vessel which seems to suggest a security team was on-board. Again, we cannot confirm this report and will provide a further update on this allegation. If it was the Puntland Police, this bears a resemblance to one of the earliest forms of Somali piracy when members of the coast guard hijacked a vessel they were supposed to be guarding.

It is pertinent to note that despite the dearth in piracy activity, the threat of piracy off the coast of Somalia remains extant.  This incident is a timely reminder for vessels and the shipping community to ensure that they adopt hardening and protection measures and adhere to BMP 5 in order to mitigate the risk of piracy and other forms of maritime crime. Watchkeeping and enhanced vigilance are imperative for vessels that are required to transit close to the Somali coast and other high-risk areas. Finally, it is strongly recommended that vessels report their movements to the UKMTO and the MSCHOA who plan and coordinate military responses.