The Combined Maritime Forces (CMF) reported on the 17th April that the La Fayette frigate seized 413kg of heroin during a patrol in support of CMF on the 11th April. La Fayette’s seizure is the third for the French Navy in support of the CTF 150. Together with the Marine Nationale destroyer Jean de Vienne, the 2 ships have confiscated over $370 million of drugs over the last two months. 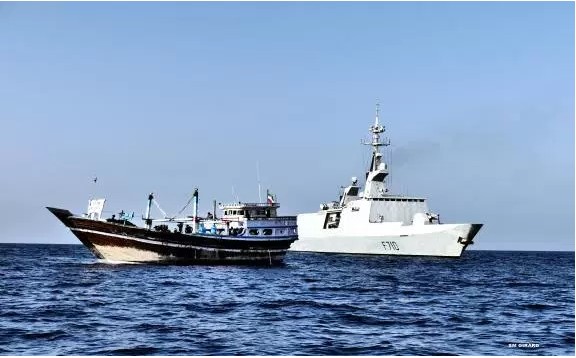 The frigate detected a dhow of interest and closed in to investigate further. Following a boarding, the vessel found to be without nationality and a search took place locating 413kgs of heroin with a street value of over $96 million. The illegal drugs were transferred to the La Fayette to be destroyed at sea. (Source: Combined Maritime Forces)

Recent large drug seizures in the Arabian Sea highlight the shipments heading in southerly flows are likely to be travelling to regions in East Africa. These regions are used predominantly as transit zones and have a direct impact on the operations of terrorist organisations.

UAE forces intercept drone carrying explosives intended for Yemen targets: UAE forces intercepted a drone carrying explosives believed to be targeting Arab coalition forces deployed along the western coast of Yemen. Military sources stated the intended target was coalition forces along the Red Sea coast making a push for the Yemeni port city of Hudaydah. The Saudi coalition is preparing for a renewed push to capture Hudaydah from the Houthi rebels. (Source: The National)

UN Yemen envoy warns of possible military operation around key port of Hudaydah: Reports of a possible military operation around a major urban centre and key seaport could ruin any hopes of ending the civil war. “We also hear reports that movements of forces in Yemen are on the increase and that the terrible prospect of intensive military operations in Hudaydah may be soon forthcoming.” The UN has previously warned that the Yemeni government and the Saudi-led coalition were preparing an offensive on Hudaydah seaport to stop Houthi rebels from using it to smuggle arms into the country. (Source: VOA)

Somalia’s Puntland region asks UAE to stay as Gulf split deepens: Somalia’s semi-autonomous Puntland region urged the UAE not to close its security operations in the country after a dispute with the central government, saying that the Gulf power was a key ally in the fight against Islamist militants. The central government announced this week it was taking over military training run by the UAE. The dispute goes to the heart of an increasingly troubled relationship between Gulf states divided by their own disputes and fractured Somalia, whose coastline sits close to key shipping routes and across the water from Yemen. Analysts have said the complex standoff risks exacerbating an already explosive security situation on both sides of the Gulf of Aden, where militant groups launch regular attacks. (Source: Reuters)