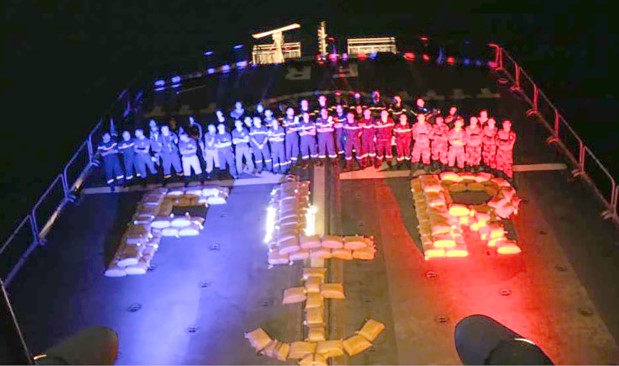 More than 7,000kg of hashish with a street value of $3.5 million was confiscated from the Indian Ocean by a French naval vessel operating in the region. A total of 3,900kg of hashish were discovered on a fishing dhow spotted behaving in a suspicious manner, prompting French frigate FS Floreal to conduct a boarding. A few hours later, the vessel’s helicopter detected another fishing dhow behaving suspiciously and once again the crew conducted a flag verification boarding and let loose Max, the ship’s sniffer dog who uncovered another 3,500kg of hashish.

This was the most significant seizure of illicit drugs in the Indian Ocean since the Royal Saudi Naval Force took over command of the Combined Task Force (CTF) 150 in August, which operates under the Bahrain-based Combined Maritime Forces (CMF).CTF150 has seized and destroyed more than 1,500kg of heroin and over 40,000kg of hashish in the last 12 months. Profits from the sale of narcotics is a known source of funding for terrorist activities in the region.

Hodeidah port continues to be operational as the offensive pushes further into the city of Hodeidah. This is likely to disrupt port operations. It is estimated over 900,000 people are in desperate need of humanitarian assistance in the Hodeidah governorate alone. The port serves approximately 80% of Yemen’s imports making it critical port for aid supplies to enter the country.

No attacks against shipping by Houthi rebels have been recorded since July 2018 although the threat of attack remains. Attacks with the use of explosive laden skiffs have been used frequently by the rebels. Saudi vessels and warships remain the target although it cannot be ruled out that commercial shipping may be subjected to a miscalculated attack.

Fifty-four Houthi militias were killed, and 13 others captured during military operations carried out on Yemen’s Red Sea Coast, by joint Yemeni Resistance Forces, with the support of the Saudi-led Arab Coalition.

Colonel Turki Al Malki, the Official Spokesman of the Arab Coalition, has stated that the Royal Saudi Navy Forces detected an attempt by the Iranian-Houthi militia to target Port of Jazan, Saudi Arabia.

According to the Saudi Press Agency, Malki clarified, “At (04:50) and (05:05) the Royal Saudi Navy Forces detected the movement of two remote control explosive boats headed to the Port of Jazan. They were intercepted and destroyed in accordance with the Rules of Engagement, which has led to minimal damage”.

Islamic State (IS) group has been mounting noticeably more attacks in Somalia in recent months, following the group’s loss of its caliphate heartlands in Syria and Iraq late last year. Most of the attacks that IS has claimed in Somalia were labelled as targeted assassinations against Somali intelligence and security personnel, with some of them filmed taking place in broad daylight in public. And while the group had initially claimed many of the attacks in the south-western city of Afgoye, most of its latest claims were reported in the nearby capital Mogadishu.