Incident Details: At 0555UTC on 18 November 2017, an FV in position 0156.0S 04923.0E (380NMs of the Somali Coast) reported that 1 skiff with 4 POB Approached the FV to 1000 yards. AST Fired warning shots and Skiff withdrew. FV is SAFE (Source: UKMTO).
At 1909 UTC on 17th November, a master reported being attacked by one skiff with 4 people on board. They tried to board the vessel but failed due to razor wire placed by the merchant vessel along the gunnel. After failed boarding they fired 2 RPG rounds at the vessel but missed. The skiff then withdrew. The vessel is safe. Vessels are advised to keep well clear of this position and to exercise extreme caution if in vicinity (Source: MSCHOA). 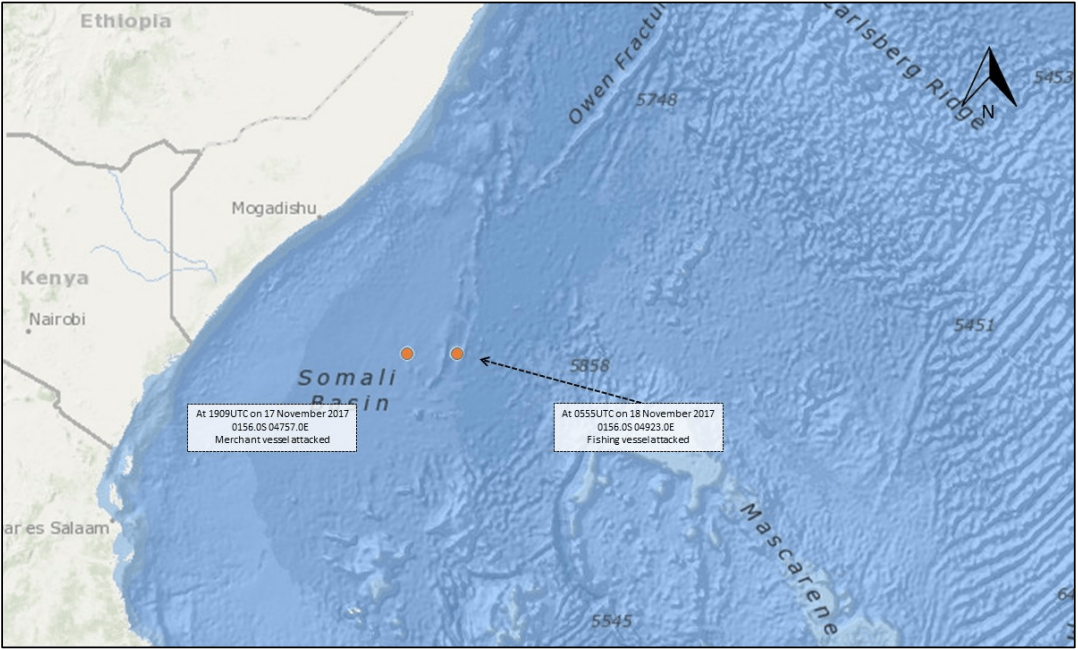 The two incidents follow on from earlier reports of a suspicious approach by a single skiff with the same amount of personnel on-board and it is likely to be the same skiff. The incident reported by the MSCHOA is worrying in that the personnel from the skiff made a definite attempt to embark the merchant vessel but were deterred by defensive  measures.
There was no information to suggest that a security team was present on board the vessel, and the attack with the 2 x RPGs demonstrates a clear intent to board a vessel with a view to hijacking. The attack on a fishing vessel was likely to be an attempt to take control of a ‘mothership’ and this enhancing the pirates’ longevity and capability in the areas (in terms of attack range).
It is worthwhile to note, both incidents occurred within 85nm of each other. It is likely that this skiff will be drifting around and utilise the currents in the Somali Basin to conserve fuel and locate further targets