Togo’s navy, which is based in the vicinity of Lomé’s port, is conducting more frequent patrols, which offer ships a degree of security. These measures have greatly reduced the number of piracy incidents in the region. In 2018 there were just two minor incidents to report in Togo’s territorial waters.

Though suspicious approaches and attempted boarding’s appear to be a low threat in the vicinity of Lomé, the capacity for pirates to increase their area of operation beyond the waters off Nigeria means that neighbouring countries (Benin, Ghana, Togo and Cameroon) can quickly see an elevation in risk.

In summary the Port of Lomé remains a low threat environment. Pirate activity is likely to be sporadic and at a low level. However, transiting though neighbouring waters carries a much greater level of risk.

ICC International Maritime Bureau reports indicate that all 2018 crew kidnappings have taken place in the Gulf of Guinea. In total, 48 vessels were boarded, with 23 attempted attacks, 11 vessels fired upon and four vessels hijacked. As maritime reports indicate, GoG piracy is largely confined to Nigerian waters and its immediate neighbouring countries, Benin and Ghana.

Incident details: Seven pirates aboard a skiff came alongside a drifting tanker vessel and attempted to board the poop deck. Alert duty crew raised the alarm, resulting in the pirates aborting the attempt and moving away. The tanker vessel reported a suspicious vessel in the vicinity of the boarding attempt, from which the pirates may have approached the vessel.

Incident details: A blue and white fishing boat approached a merchant vessel 278 nm south of Lomé before the boat dispatched two skiffs. The skiffs approached the vessel, reportedly in an attempt to board. The vessel carried out evasive manoeuvres, preventing them from coming within 0.5 nm. The vessel was reported as safe. 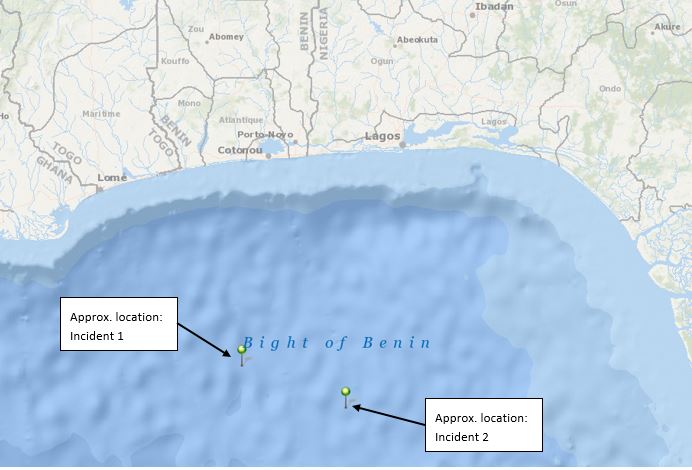