Incident details: On the 31st March 2018 at 0535 UTC an MV in posn 1357N 05143E was fired upon by 2 skiffs, AST returned fire and skiffs moved away. Vessel and crew are safe. Vessels transiting in the area are advised to exercise extreme caution. (Source: UKMTO) 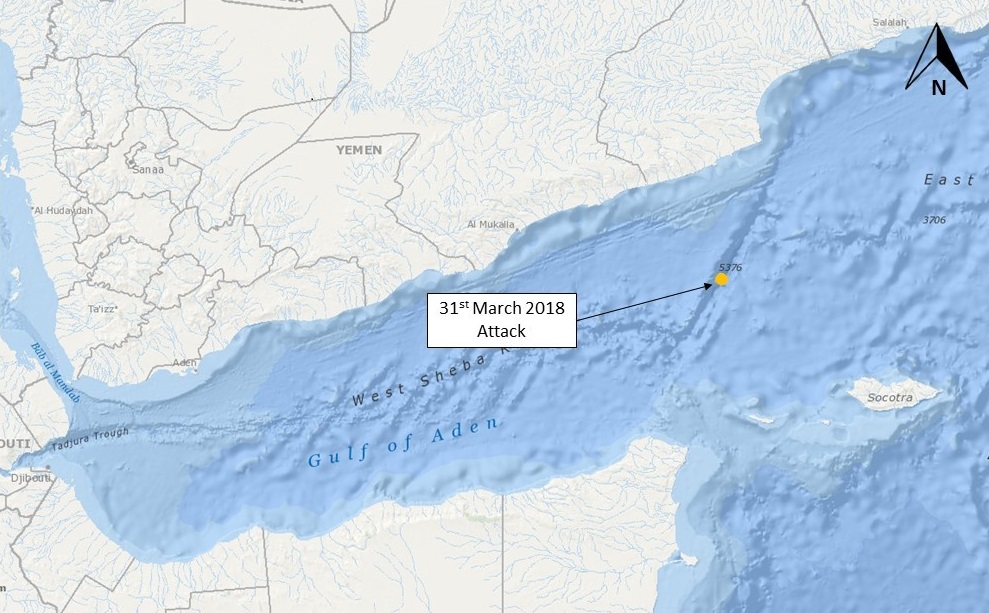 Intelligence Comments: Reported incidents, although few and far between, over the past month have been concentrated in and around the Bab-el-Mandeb strait and Gulf of Aden. This incident was located in the region of Eastern Yemen, namely Al Mahra and Hadramawt Districts. Eastern Yemen has been a major attraction point for weapons smuggling. The ports in the region are poorly governed and are used as key entry points for smuggled goods, including arms. In addition, pirate groups are also known to operate in the coastal regions of Puntland Somalia, namely Eyl. The incident is difficult to assess with limited information as to whether it is attributed to regional patterns of life, illicit activity or Somali piracy. However later reporting stated the skiffs were equipped with ladders suggesting possible piracy activity. It should be noted that as the Indian Ocean enters into the inter-monsoon period, favourable weather conditions may see another surge in piracy related activity as was seen in the previous period in March – May 2017. Extreme caution must be exercised.

Incident details: On 03 April 2018 at approximately 0915UTC a Merchant Vessel reported an explosion in position: 1429.3N 04211.2E (100nm west of Hodeidah, Yemen, Southern Red Sea). A Kingdom of Saudi Arabia (KSA) flagged merchant vessel initially reported a detonation and then light plumes of smoke emanating from the bow on the starboard side forward of the bridge at 030915Z. Follow on reporting indicated that a possible projectile had penetrated the starboard bow above the waterline. The possible projectile created a hole through the starboard bow with minimal external damage (MSCHOA and UKMTO). 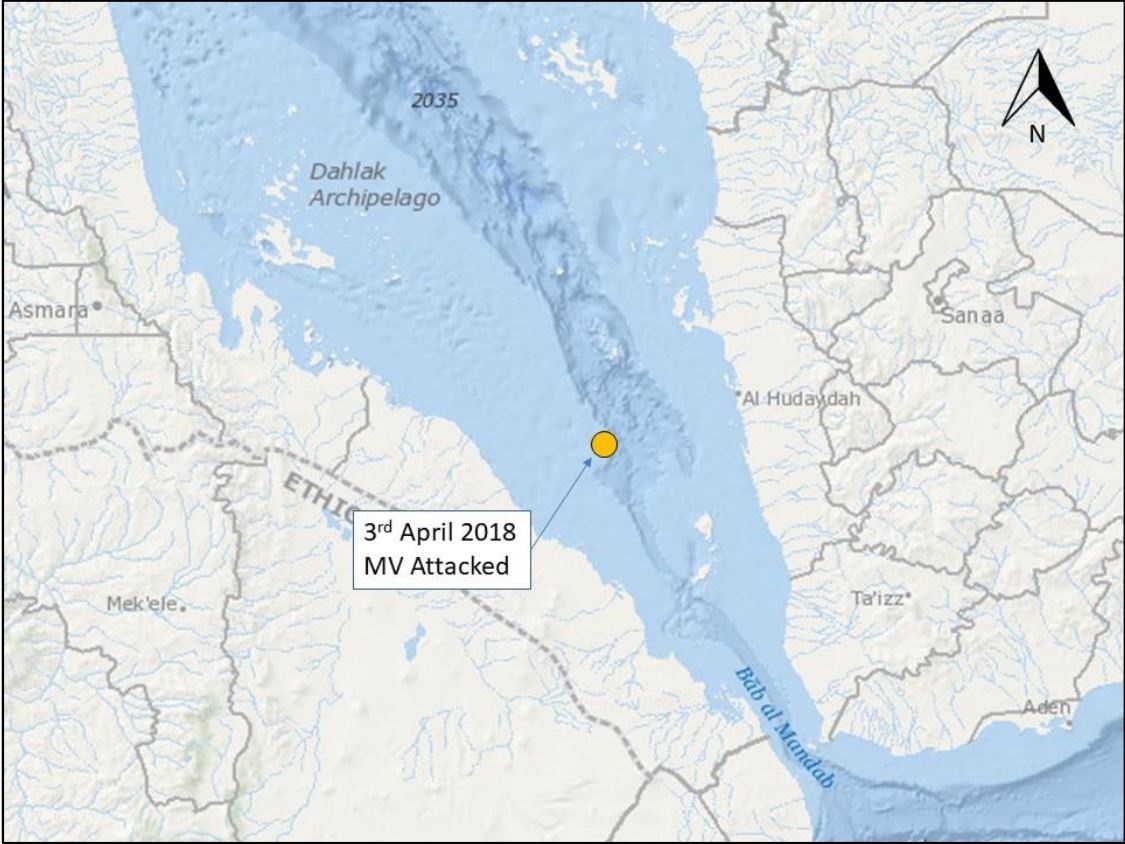 Intelligence Comments: This is the first attack by the Houthi militants on any vessels passing through the key choke point between the Arabian Peninsula and Horn of Africa. The targeted tanker was slightly damaged, but able to continue along its course, escorted by a coalition vessel. The attack on the oil tanker follows a recent escalation in the conflict. Last week, the Houthis fired a barrage of seven missiles at Saudi Arabia, including three at Riyadh and Jizan. Recognising the economic stakes for one of the world’s biggest oil exporters, the Houthis have targeted Saudi oil infrastructure before, and have vowed specifically to target Saudi tankers near Hodeidah.

Houthi officials have previously threatened to block the vital shipping lane through the Red Sea, saying they would take “strategic choices” if the coalition continued its efforts in the Hodeidah province. Last month, the Houthi rebels claimed to have fired a missile at facilities run by the state-owned oil giant Aramco, but the company denied that its operations were affected. In April 2017, a Houthi remote-controlled boat fitted with an explosive attempted an attack on an Aramco oil distribution terminal, but Saudi forces blew it up before it reached its target, according to
Saudi authorities.

Tracking information suggests that the vessel was the AQBAIQ (IMO: 9247182) a VLCC, currently carrying around 2 million barrels of crude. According to data, the tanker was travelling past Hodeidah and briefly changed course due to the failed attack. The vessel is now on its way to Ain Sukhna in Egypt which is the main offloading point for the SUMED pipeline into the Mediterranean. The bulk of Europe’s crude oil imports from the Middle East arrive through this key pipeline.

Security experts played down the wider threat posed to oil tankers in the region following the attack. The real threat is escalation of international involvement. The more sophisticat 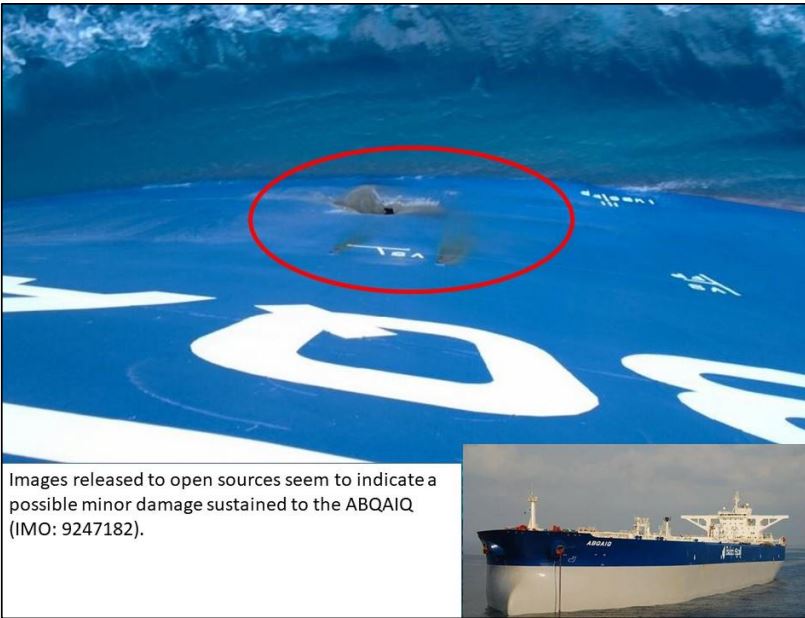 ed these attacks become the more potential there is for international involvement.

While the coalition described the damage to the tanker as minor, the assault appeared to be the first time since the war began in 2015 that the Houthis have caused significant damage to a ship carrying Saudi oil. There have been other incidents in recent years where rocket-propelled grenades were fired at tankers near the Bab el-Mandeb, but it wasn’t clear who was responsible.

Tuesday’s failed attack also confirms that the Hodeidah port continues to be used as a launchpad for terrorist acts and arms and rocket smuggling operations. The continuation of such attacks proves the danger of the Houthi militias and their backers to regional and international security. The Houthis have vowed to step up attacks on the Kingdom so further escalations are expected, both on land and on the maritime domain.

Air strike kills 12 civilians near Yemeni port of Hodeidah: On the 2nd April an air strike near Hodeidah killed at least 12 civilians. Hodeidahis responsible for over 80% of Yemen’s imports and from where most of the humanitarian aid reaches millions of civilians. The operation of the port, controlled by Houthi rebels was not affected by the air strike.

Huge fire destroys aid supplies at Hodeidah port: The fire engulfed the world food programme warehouses full of cooking fuel and food supplies. At the moment the cause remains unknown. Hodeidah port, situated on the Red Sea handles the bulk of Yemen’s imports, including food and aid supplies.

Arab coalition – weapons smuggled to Yemen’s rebels come from Lebanon’s Hezbollah stronghold: The Arab coalition stated on Thursday 29th March that weapons sent to Houthi rebels in Yemen are smuggled from Lebanon’s southern suburb of Beirut, a stronghold of the Iranian-backed Hezbollah group. Col Al Malki stated that ‘The smuggling of the weapons did not start in Iran. It started in the suburbs of Beirut and goes all the way to Syria, it goes to Iran and through the sea it comes to… Yemen.’

Al Shabaab attacks an African Union base in Somalia: Al Shabaab militants attacked an African Union peacekeeper base in the town of Bulamarer, 130km southwest of the capital Mogadishu. Since withdrawing from Mogadishu in 2011, al Shabaab has lost control of most cities and towns but still retains a strong presence in regions outside the capital.