The tactical situation across the Indian Ocean High Risk Area (HRA) remains the same in terms of the threat of piracy and armed robbery. The reporting period (21 – 28 June) has remained quiet with no confirmed piracy incidents to report. The current assessment is that piracy attacks will LIKELY remain sporadic and at a low level. However, the threat from piracy persists: it is only supressed.

Attacks linked to the Yemen conflict.

Based on current intelligence provided by EU NAVFOR and CMF, it is assessed that merchant shipping not directly linked to the Saudi-led Coalition (SLC) is UNLIKELY to be deliberately targeted. However as demonstrated by the MV INCE INEBOLU the risk of misidentification and collateral damage is very real. It is assessed that non-state actors are using both AIS and non-AIS methods to target SLC vessels. Masters can expect to see an increased coalition warship presence in the Bab-el-Mandeb straits as a precaution.

Another aspect of the maritime threat, particularly in the southern Red Sea, is the use of naval mines and Water Borne Improvised Explosive Devices (WBIEDs). The threat from unknown groups, possibly terrorist groups, is LIKELY to persist, however there have been no incidents since May 2017.

In late 2017 there was reporting indicating the use of naval mines by Houthi forces. We assess that the use of mines is specifically targeted towards the SLC and intended to reduce their access to key ports. Despite not being the intended target, this may have an effect on civilian vessels that are either using the ports or transiting close to the coastline. 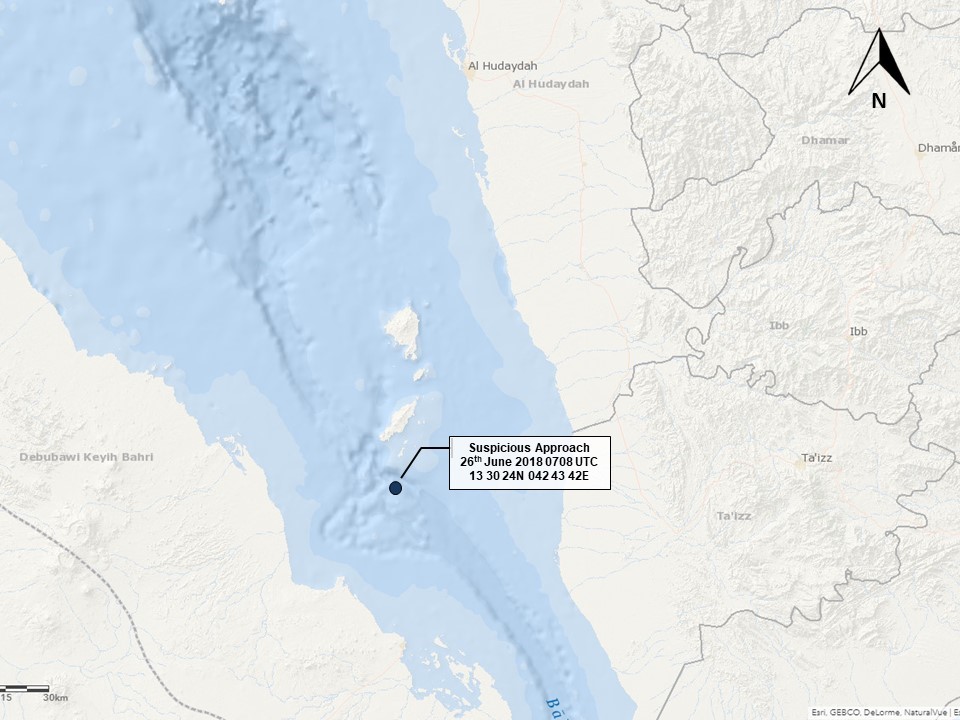 Incident details: At 0708UTC on 26th June 2018 an MV in position 133024N 0424342E was approached by 2 speedboats with 8-10 POB in each. AST showed weapons and speedboats departed. Speedboats had previously approached 2 other MV’s in the vicinity. Vessel is SAFE. Vessels transiting the area are advised to exercise extreme caution (Source: UKMTO).

Assessment: Whilst the overall threat to merchant traffic not directly involved in the conflict in Yemen remains unchanged, these incidents highlight the continued threat of conflict spill-over in the maritime domain, particularly in the Southern Red Sea. It is assessed that vessels not directly linked to the conflict in Yemen are UNLIKELY to be deliberately targeted, however the risk of misidentification / collateral damage remains a REALISTIC POSSIBILITY.

The threat to shipping is greater when in proximity to the Yemeni coastline and the islands in the Southern Red Sea (SRS). Therefore, where feasible, vessels are advised to utilise the Maritime Security Transit Corridor (MSTC), which maximises the distance from the islands in the SRS and maintain best speed.

The situation in Hodeidah is complex and still evolving. The requirement for vigilance when transiting this area, together with the timely reporting of all suspicious incidents, remains crucial.

The United Arab Emirates (UAE) said this week that the Arab coalition fighting the Houthis in Yemen was cooperating with a UN envoy to end fighting, but the Houthis must quit the port city of Hodeidah as a condition for any peace deal. The UN is seeking a breakthrough in the three-year-old conflict that has killed more than 10,000 and caused the world’s most urgent humanitarian crisis, with millions facing starvation and disease. The Houthis control the capital and most populated areas. The alliance of Arab states led by the UAE and Saudi Arabia has been fighting since 2015 to restore Hadi’s government, and describes the Houthis as pawns of Iran, which the Houthis deny.

The coalition launched the biggest assault of the war this month on Hodeidah, Yemen’s main port city, and seized the airport last week. The Iran-aligned Houthis have indicated they would be willing to hand over management of Hodeidah port to the United Nations, and western states have encouraged the Arabs to accept such a deal. However, it remains to be seen whether the Houthis could be persuaded to leave the city. They have been preparing for battle in urban areas, where the Arab states’ forces would be expected to meet tougher resistance than they have so far.

Somalia continues to undergo major political change and instability, which allows freedom of movement and opportunity for criminal networks operating in the region. The progress made by the Government (both Federal and Regional) thus far in re-establishing both functioning political institutions and a reliable security apparatus, is slow.

The security situation across Somalia remains as unstable and fragile as ever.

The relationships between and within the regional administrations are often tense. The same applies to their relations with the Federal Government of Somalia (FGS). The Somali security services are undermined by internal disputes and corruption. Consequently Al Shabab (AS) maintains freedom of movement in large parts of southern and central Somalia and a footprint in Puntland, close to Bosasso. For the moment, the contribution of African

This complex security landscape creates significant opportunities for criminal networks to operate both on land and at sea. Although piracy is the most commonly known threat, there are a number of other illegal maritime activities taking place in the area. Criminal groups previously involved in piracy are considered highly likely to have switched to other lower risk criminal activities to meet their financial objectives. The local maritime security forces are largely ineffective, with the exception of Somaliland and Puntland’s Puntland Maritime Police Force (PMPF) in the north, where some policing capability exists. The dispute between the United Arab Emirates (UAE) and the FGS at present has not affected the vital funding stream from the UAE to the PMPF, however the situation remains fluid.