After months of limited pirate activity, this latest incident is a reminder of the threat posed to vessels transiting through the HRA. Recent efforts to improve the security environment will reduce the impact of Somali piracy, however, continuing deterioration of onshore conditions in Somalia and Yemen such as famine, terrorist groups, a weak central government and poor governance of coastal areas continue to influence piracy in the region. Pirate financiers capitalise on the chaos offering opportunities to local people. Piracy groups operating from Somalia still bear the motivation to try and carry out attacks and still possess the capability to target merchant vessels. Increasingly, vessels in the HRA are subjected to incidents that appear to be co-ordinated small boat piracy approaches however they choose not to ultimately attack. These incidents are then difficult to classify as attempted piracy or simply as regional patterns of life in the area. The increased presence of naval patrols and armed security on board vessels act as a deterrent to the threat of piracy, however those vessels transiting in the area without the presence of armed security remain a significant risk.

One (1) incident to report during the reporting period (UKMTO)

Saudi Arabia is to provide Yemen with oil products to support power and water-treatment plants, with the first shipment set to reach Aden by the end of October. The announcement was made by Mohammed bin Saeed Al-Jaber, the Saudi ambassador to Yemen, executive director of the Isnad Center for Comprehensive Humanitarian Operations in Yemen and supervisor of the Saudi Reconstruction Program in Yemen, during a meeting at his office in Riyadh with a number of diplomats and researchers concerned with Yemeni affairs.

In a confidential report to the Security Council, the panel said it continues to believe that short-range ballistic missiles and other weaponry were transferred from Iran to Yemen after an arms embargo was imposed in 2015. In a letter to the panel, Iran maintained that the missiles, which the Houthi’s have dubbed the Burkan, are a domestic upgrade of SCUD missiles that were part of Yemen’s arsenal before the start of the war.

The experts are also investigating information that the Houthi’s received a monthly donation of fuel valued at $30 million. Iran has denied providing any financial support to the Houthi’s.

During the inspections of the missile debris, the experts mandated by the council also found power converters produced by a Japanese company and Cyrillic markings on components that suggested a Russian link. The investigations of those findings continue.

Yemeni rebel group claimed on 13 October that it had destroyed the USA-made M1A2S Abrams main battle tank during the storm on Saudi military post in the Jizan province in southern Saudi Arabia:

Houthi’s have released videos of their troops destroying Saudi tanks and other targets. Militants fired on a tank, as a result of which Abrams lost the ability to move. The crew of the tank was injured and tried to escape, but one of the tankers was killed. After that, the militants set fire to the damaged tank.

Somali intelligence officials say the largest U.S. military airstrike against al-Shabab extremists in Somalia in nearly a year largely destroyed a training camp where recruits were preparing to graduate and killed more fighters than the U.S. initially announced.

Two officials tell The Associated Press that several missiles were fired by two unmanned U.S. drones. Some of the freshly trained al-Shabab recruits were “burnt beyond recognition” and the death toll exceeds 75, one official said. The U.S. Africa Command initially said about 60 extremists had been killed. The U.S. said the strike was meant to deny the al-Qaida-linked extremist group, the deadliest in sub-Saharan Africa, the ability to reconsolidate. Al-Shabab has several thousands of fighters and has proven to be resilient over the years, carrying out suicide bombings on high-profile targets in the capital, Mogadishu, and other cities as well as more conventional attacks against Somali, U.S. and African Union forces.

Despite what is clearly a painful blow to al-Shabab, the large concentration of Shabab fighters a significant distance from the extremist group’s usual strongholds indicates its reach, and demonstrates the al-Qaida branch’s resilience across the country. 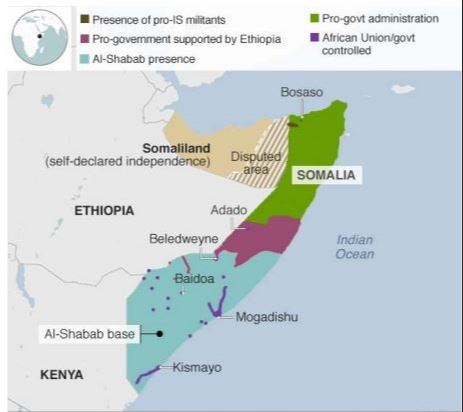 Until the deep rooted issue of piracy in Somalia are resolved, piracy will continue to be a threat. 2017 saw the worst drought Somalia has seen in 40 years, this coupled with the struggling government and extreme militant violence has brought 6.7 million people into crisis. Pirate financiers capitalise on the chaos offering opportunities to local people. Pirate groups are known to operate in the coastal regions of Puntland namely Eyl and further south in Galmudug namely Hobyo. It is needless to say, as the increased instability in Somalia continues, it will serve as a permissive environment for piracy operations with an ongoing threat to shipping in the region. The most recent incident that may have been pirate related coincides with weather conditions that are currently favourable for skiff-based piracy operations.